Ten years after a brutal war, cannibals and humans fight over the pieces of a hardscrabble existence.

Former Navy SEAL Doyle has been prowling the broken remnants of a devastated America for years. Alone in an armored bus loaded with weapons and supplies, he’s grateful for his solitude. Being alone makes it easier to survive, as othe 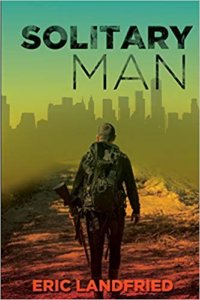 rs can become a liability at the end of the world. But when a particularly brutal attack leaves Doyle in need of fuel and repair, he has no choice but to venture into the nearest settlement.

Jonathan has been pastoring a small church of Christians in that same settlement, but when he meets Doyle he sees an opportunity to expand his ministry. Cannibals have kept everyone from traveling, but Doyle’s armored transport and weapons bring hope to his small band of followers. The two men strike up a mutually beneficial bargain, but neither of them realizes that this journey will change them in ways they could never have imagined.

As they search for other believers, they must battle cannibals, militant atheists, and a mysterious super-soldier. Doyle’s unbelief and Jonathan’s faith will collide in this action-packed wasteland.

Solitary Man is a gritty, action-packed post-apocalyptic story with a solid, Biblical worldview.

Doyle, an ex-Navy Seal, is alone after the apocalypse, he finds a small community of Christians who see him as the best opportunity to spread their faith across the dangerous, deadly, and unfamiliar land of the new world. They encounter the different inhabitants of the after-the-end-of-the-world world, for better and for worse, and Doyle slowly gains a better understanding of why there Christians think and behave the way they do.

I had my assumptions about what this book would be like when I started. As a new take on the end-of-world trope from the perspective of a devout Christian and another (arguably) agnostic character, written by a clearly devout Christian, I had a few ideas where it was going, and I was pleasantly surprised by the end to see that some of them were proven wrong, and comfortably satisfied with the ones that were proved right.

Doyle drives into a small community of survivors after his bus takes damage fighting “cannibals” (This universe’s constant antagonist threat a la Mad Max’s cults or zombies). Here he meets Johnathan who convinces him to take his family, along with other members of the community, along with him on his bus to establish new churches in nearby settlements.
The encounter and fight a group of cannibals at an abandoned mall, and end up capturing a cannibal who Johnathan believes can be saved from her madness.
They escape an attack by a man known as “The General” who is teaching and leading the cannibals in the wasteland. Eventually, they encounter a town run by “mama” which is a strictly no-faith settlement. Naturally, those who decide to practice their faith anyway are found and sentenced to death. At the same time, The General attacks the settlement trying to get to the Christian travelers. Doyle manages to defeat the Canibal attack, and overthrow the Mama regime. Some of their group decide to stay behind to manage the new church as the rest most on.
The group is trapped by the General later on their travels, and Johnathan’s son is captured and taken to a cannibal nest. Doyle and the cannibal girl they rescued go to save him. They find him, along with another prisoner who tells them cryptic clues about what actually happened to the world, and manage to escape. A high-speed chase ensues, during which Johnathan’s wife is killed and he, against his faith-based reservations, takes his anger out on the General and kills him.
Finally, the group makes it to a second settlement, this one based on open ideas and free-thinking. The group decides to stay as Doyle leaves to investigate the clues the prisoner gave them about finding the truth about the end of the world.

The author was straightforward. This is obviously a Christian book and he doesn’t try to hide the fact that the message of the book is to persuade others to come unto Christ. He has a message and he tells it and does a pretty good job of weaving it into the narrative, without it detracting from the tension of the scenes too much.

I also liked that the ending didn’t end with a predictable (spoiler) conversion of Doyle. I like that his future is left ambiguous, and he can make up his own mind, just like us.

I really liked how we learned more about the actual “apocalypse” and what happened. From the mysterious black ships in the sky to The General and his mission, and the ramblings of the crazy man in the Cannibal nest. It really made me more interested in the world, what happened, and what Doyle might discover.

The book is also a great metaphor for life, and the challenges, people, and choices we have to make while going through it. I thought this was masterfully done, and each point of the story had me thinking about what part of life it referred to, and the different choices people can make at those stages. As we project ourselves onto Doyle and follow him as he goes through the various challenges of life, from beginning to end, we can decide, along with him, whether to listen to Johnathan or not. A very interesting way to write, my hat off to the author for accomplishing this feat.

The author also did a good job of sticking to the main characters but also switching to secondary characters when needed. It kept the story fresh and provided necessary exposition and background for when we needed it without getting too complicated by sticking with just the main protagonists.

There were just a few things I didn’t like, and looking back, they seem very nit-picky.

I didn’t like how the people from all these settlements used all the same terms for things, even though they might have been separated for years without contact. They all called the enemy “cannibals” and they had “cannibal nests” and the people who didn’t live in cities were called “scavengers” so on. I would think they might have come up with different names for things.

Also, I understand that Johnathan and his group are extremely faith-based, and so most of their conversations and dialogue revolve around their faith, but when each settlement they reach begins each encounter by explaining their relationship with religion, I found it hard to believe. If I encountered a settlement of people barely struggling to survive in the end of the world, I don’t think their first words would be “we don’t like Christians.”

Speaking of language in the previous part, my suspension of disbelief was disrupted every time Johnathan began to preach or speak because he sounded as if here were still in a born-again chapel before the world ended. Personally, I find it hard to believe that their language, slang, and even religion, would not evolve after such a (literally) world-shattering event twenty years before. Religions today are changing rapidly already, especially the typical “American” ones, so I found it hard to believe that Johnathan wouldn’t have changed along with the world and the faith either.

This isn’t necessarily unique to this book, either. This can be a critique of the end-of-the-world genre as a whole. Trying to balance relatability with a believable evolution of the future often ends up being more relatable

I would have liked to see the author use his talent for world-building and imagination, and apply it to what he might see as the evolution language, society, slang, and religion and faith might take after the apocalypse.

There would be two things I would call a “surprise” or a “twist” in this book.

The first is that the main character, despite the constant pressure from his travel companions, does not end up converting to the Christian faith, though he does grow more sympathetic to it, even admitting in the end to a God of some kind.

The second is that the end of the world wasn’t what we were lead to believe. At a couple of places in the book, it hints that other sinister forces might have been at work, and the book leaves us on a cliffhanger with the possibility that Doyle might find something out very soon.

-Ah, there’s the Mormon reference, I knew it was coming!

-If I were Doyle, I might have left these people in the dust a long time ago.

-Ok, I like Johnathan. He’s honest with himself finally, that’s a really good character arc. Good for him.

If you’re Christian (or faithful in any way, or non-religious, but don’t mind a healthy dose of born-again preaching in your fiction). It does have an interesting take on the end of the world, and the “zombie” trope, which is a refreshing change from the norm that some readers might appreciate.

Anyone who doesn’t want religion in their fiction. The book is very heavy with the Christian dialogue, mostly Johnathan trying to convince Doyle, among others, to join him in his faith.

I can’t say I’ve read any books like this one before. There is always a huge amount of post-apocalyptic books out there, but ones that focus on the faith aspect of it, particularly from the perspective of a minister, is something I don’t think I’ve seen before. So it might be unique, or it might only exist in some very local Christian markets.