The company I work for has a tradition of a gift-exchange for Christmas. This year the price-limit was $15. My wife and I went to Target to find a last-minute gift, and when I walked past the games section and saw the card-game version of Oregon Trail for $12, my mind was made up on the spot.

Obviously that was not going to be good enough, it was only $12 after all… I needed some way to make up the $3 difference. (Yes, I realize that it was a $15 limit and not a goal. But really anything less than that is just going to give the passive-aggressive ones in the group another reason to be…well…themselves! And we couldn’t have that on Christmas, no sir.

So naturally I pulled out my dusty calligraphy tools and set to work on a hasty, yet thoughtful, letter that would accompany the card game. 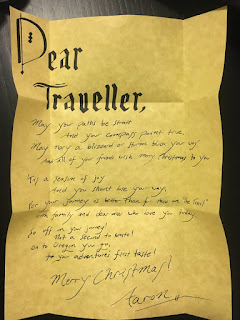 Keep in mind I am a procrastinator, and I am well aware that the meter and the rhymes do not sound as good now as they did at midnight the night before, but I was pressed for time and wanted to go to bed. Priorities.

Trying to make Oregon Trail and Christmas come together in a meaningful way was difficult enough, so I tried to take up as much space as possible with the title “Dear Traveller”, but at the end of it, this is what I came up with. When I look at this my eyes are drawn to the title itself actually, which I am happy with, because that is the part that took the most work, and the part I’m practicing to improve. So the fact that it draws the eye (in a good way) makes this a successful letter for me.

The point of this, however, is to talk about something that entered my mind while I was working on the letter. That is: The Oregon Trail seems to be one of those things where the memory of the ‘thing’ is better than the actual thing itself. I would hope you know what I mean. It happens with places you visited as a child, food you tried once, original internet videos, etc. Over the years we build up the reputation of something so much in our heads that when we eventually go back to the source of the legend, we are inevitably disappointed.

Everyone I know who is my age has fond memories of The Oregon Trail. It almost seems like a rite of passage for the ‘millennial’ age demographic. Myself included. “It’s a classic!” We say, or “Best game I played as a kid.” We’d all agree. But when I sat down to write this letter, I was thinking: how much did I actually enjoy playing The Oregon Trail?

Did I actually play the game because it was fun? Maybe it was because it had earned the reputation of an “unbeatable” game in my 4th-grade class, and those who beat it were famous for a day? Or maybe it’s so engrained in our memories because we all spent at least some time wanting to punch right through the monitor and grab Abraham by the neck and beat him senseless for daring to contract dysentery.

Would any of us choose to play The Oregon Trail right now if we had a copy on our computers? Of course! Who wouldn’t want to re-live those frustrating childhood moments? But after the first, second, and third inevitable failure (probably because we waste all our money on bullets and then spend them all shooting buffalo) we would remember why we stopped playing in the first place, and go back to Facebook that affords us a sense of false success and security that The Oregon Trail  withholds from us!

Then, five or ten years down the road, we’ll think about The Oregon Trail again with fond memories, and try our luck, only to be disappointed yet again.

Is there a moral to this story? No. But I thought it was interesting. And that’s how I wrote my company christmas letter.