Things like the passage below are why I carry a notebook everywhere I go. I get these ideas that I know will disappear in a few minutes. So I at least write down a few lines of what comes to mind, and then flesh it out later. It feels natural and obvious that it is part of the same universe, which is amazing to even myself. On a number of occasions I have had ideas and not had anything to write with handy, and the idea is lost minutes later, with only the shadow of inspiration left behind, and the regret of knowing I lost a great snippet of a hidden universe inside my own head! 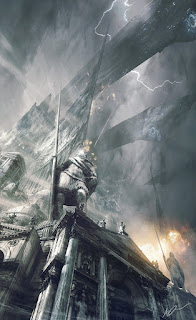 It makes me think about how much potential we lose, how much creativity we all miss out on, simply because we don’t take the time to write them down, or tell someone; or more importantly: because someone feels like their ideas aren’t worth anything? How much progress could mankind make in a day if we had one giant species-wide brainstorm?

If we took as much pride in our own work as we do in the works of the ancient peoples, or spent as much time on our own ‘art’ as we do admiring the art of Hollywood, how much better would the world be?

“I have seen the city of Adrius. I have walked the streets amid towering colossi. My heart beat within my breast with an unrelenting excitement. What grand behemoths and indescribable achievements wrought by human hands! Such magnificent sculptures that inspired an ancient pride within my very being, carved with an almost unbelievable exactness to fool the unprepared passerby into engaging conversation with those persons that do no talk, or to smell the flower that do not grow!
Not since I visited the crumbling towns and quaint cathedrals on Earth have I felt such joyful excitement in having been privileged to descend from these inspired workers of stone and metal. What glory surrounds us daily! How fortunate are we to see such days! What greater achievements could yet be realized?”

-Dr. Thomas O’Malley. Imperial Archivist upon visiting Adrius for the first time, addressing the graduates of the Imperial College of Colonial Administration.