In the Mask Made of Bone Lee and his friends meet after school but soon find themselves trapped in a game that could prove deadly. Will they play? Their blood will give the answers but who’s asking the 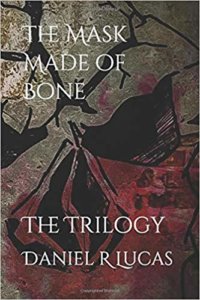 questions? There’s only one way to find out; put on the Mask Made of Bone.

In the Mask Made of Bone: Becoming Lee struggles to come to terms with his conscience and his new lifestyle. The blood on his hands haunts him. He shows his reluctance in becoming their pawn and to carry on playing their game. They decide to bring in a former keeper of the Mask Made of Bone to teach him a lesson.

Three short stories follow the life of Lee after his life takes a violent, sad, and tragic turn into the occult. Through effectively quick and to-the-point visuals, the author takes the reader on a journey into the mind of someone drawn into doing the evil bidding of unseen forces.

I was not prepared for this book. After I put it down I felt like I had taken a shot of horror/adrenaline straight to my system.

The book begins with a rather routine introduction of the main character, Lee, and his friends. They end up lost one day and find their way into an abandoned building. When they find out that they are locked inside, they start hearing voices in their heads and begin to kill each other in gruesome ways until only Lee is left alive. He discovers that he is now a part of a group of people who wear a mask made of bone and kill others as the bidding of the voices.

In the end, when his growing group of killers is sent to kill him, Lee is forced to run away and his father shows him how to stop the voices from talking. He finds the source of the voices in a new mysterious building and kills them. He, in turn, is then killed by his girlfriend who takes up the mantle of the voices.

I liked that the author had a story to tell, and he told it. No fluff. No stroking his own ego with elaborate descriptions. Did someone die? Yes, their throat was cut. Done. Next.

It felt like every line had a purpose and anything that didn’t contribute to Lee’s struggle was cut away. Very basic character descriptions are all I need since I tend to imagine them however I want anyway.

I really liked how the author didn’t tell me how to feel. There were sad moments, there were bad things happening, but he never said: “This is sad, you should be sad now.” He created the scene and told it in such a way that the emotion was clear.

The antagonists were mysterious and VERY interesting despite having nothing but just a few lines of dialogue. We don’t know what/where/who they are or what they look like, and only get a couple answers toward the end. But the way they communicated to the characters, and to each other, was extremely fascinating. I was wishing the author had more scenes with them in it, but then I realized that my fascination with them was fueled, in part, by the fact that they were unknown. That was great.

This author did a lot with a little. These are very short stories that waste no time and tell a complete story from beginning to end. He respected my time and now I have a great story that will stick with me (and make me ask questions about myself) for some time to come.

The fact that the author always referred to the masks as “the mask made of bone” was an interesting choice, and it really implied that these weren’t just masks, but powerful occult tools.

This book is short. Very short. And most of the problems that I could talk about are due to the fact that it is so short. There were some characters that deserved more time, more explanation, and some scenes could have used more description.

I read it on two train rides to and from work. There was a very unique and interesting world (and a magic/occult system) created here, and the author just barely scraped the surface.

Some of the violence was a bit much for me, but it was over so quickly that it wasn’t gratuitous.

For as short as the stories were, I felt it took too much time to get “started” as I would have liked. I feel much more of the meat of the story could have been explored instead of describing the group of friends as much as they were, especially since they all died so early. I couldn’t care less about what they look like or how good of friends they were. I simply didn’t have enough time to get connected.

There are multiple twists and surprises, at least one in each “book” of this trilogy. I genuinely didn’t see any of them coming, which is surprising given how short each story was. That was a very impressive accomplishment, and I’m eager to see what else the author can do in the future. It made the story as a whole really great. The author has a great talent here for revealing twists and unraveling a story that should be built upon!

“This doesn’t really seem that far-fetched, now that I think about it.”
“Oh, that sucks. Oh, THAT sucks. Oh, THAT SUCKS!”
“Why do I enjoy cheering for the bad guy?”
“Oh no, the bad guys are dead, I wanted to hear them talk more.”

Anyone who wants a very powerful story for an afternoon. It would be very good for a campfire story, now that I think about it. (Bring a mask made of bone) If you’re a fan of the occult side of HP Lovecraft, you’ll most likely enjoy this.

Those who don’t like violence, vivid blood descriptions, or the occult. That is 80% of this book.

Reminds me of Wake of Vultures, by Lila Bowen. Or really any serial-killer story from the killer’s perspective.