A city that exists in a world beyond governments, where war and climate change have destroyed the old order. Corporations are now the authorities of the surviving city states. The elite live in luxury above the clouds in their towers, everyone else lives further down, based on their corporate and economic worth. 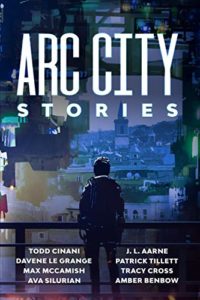 Arc City Stories is an exciting, action-packed collection of nine cyberpunk tales, written by eight authors, of various citizens each trying to survive, in their own way, this brave new world.

A collection of short stories set in the cyberpunk city of Arc. Each one is a self-contained narrative, but they share some of the same elements including setting, companies, drugs, technology, and more.

I don’t know if I’m just not looking hard enough, but with only one submission to our site for cyberpunk, I knew I had to try it first. While Arc City Stories doesn’t try anything new or reinvent the genre, it is a fun romp through a familiar setting of a post-future world filled with the all the familiar things we’ve come to expect, and love, from cyberpunk: cybernetics, exotic drugs, insane inequality, powerful corporations, rampant crime, holographic billboards, and more.

Nine different narratives make up the book for Arc City Stories. They follow characters that include a delivery girl, an ex-security officer, a club bouncer with a unique talent/curse, a technology guru, and more. Many of them end in a tragic or not-happily-ever-after way, in true cyberpunk style. I won’t summarize each one, and each summary would cover most of each short story anyway.

It was clear that the authors are passionate and knowledgeable about what makes cyberpunk enjoyable. It would be all too tempting to write a fun story set in Arc City with a happy ending, but that’s not what the genre is about. The setting is bleak and the stories bleaker. I went in expecting a certain type of story, and that is exactly what I got. Sometimes you just want a quick, fun story in a different world. They didn’t get bogged down in the technical details of how everything worked, instead, they assumed the reader had a basic knowledge of what a cyberpunk world looks like and how it operates and spent more time on the atmosphere and action of the stories. There’s a drug that mixes chemicals and nanobots? Sweet, I don’t need to know more. It is quick, fast-paced, and exactly what you’d expect.

Cyberpunk emerged, initially, as a reaction to the fears of out-of-control corporatism. The authors did a great job of exploring what companies in this world would be like, even explaining inter-company relations and the impact on the everyday person. While at the same time, it didn’t feel preachy, or that the message outweighed the story. You can enjoy these stories without worrying you’re being beat over the head with a parable.

I liked that the different authors were able to tie in different aspects of the city together, making it feel cohesive. Even though there were obvious differences in the styles of writing between authors, the fact that all these characters inhabited the same city felt believable since familiar elements flowed through each story, e.g. technology, drugs, and companies.

I thought the authors did a great job of making Arc City a character in its own right. The city setting in central to cyberpunk and these short stories worked hard to make it feel like a living, breathing place in the short space they had available.

Some of the stories were better than others, but the ones that hit really hit. The last story is a second part to the opening story, and really takes a sharp turn in where you thought it was going, ending on a bitter-sweet note that really hits hard. I was so engrossed in it, in fact, that I missed my train stop and had to get another one to get to work. What better compliment can there be?

Another story that really stuck with me was one about a retired company officer who had to escort a runaway to safety outside the city walls. While I thought it was predictable, this wasn’t a bad thing. The story was rich in imagery and feeling and felt more poetic than just an action story. I was thinking about that one long after I went to bed that night.

Some of the stories felt a bit rushed, leaving the characters forgettable or irrelevant. I forgot about a couple as soon as I moved on to the next chapter. Pretty much all of the stories relied heavily on the fact that the people/main characters have cybernetic implants or technology upgrades.

A lot of the plot points also focus on this. Maybe it was a conscious decision during the authors’ writing prompts to explore the results of enhancing the human body, but I felt like it took away other areas that deserved more space like character development.

The authors could have tried harder at doing something new with this universe. If you’re familiar with cyberpunk in even a casual way, you won’t find anything new here. While it was fun to just experience a typical cyberpunk setting, it would have also been interesting to see a new take on it or see something that hasn’t been explored before. There’s nothing here that you haven’t seen before, which isn’t bad, but it would have made it that much more fun.

There was more than one that made me sit up while I read. Particularly the story about the runner Scarlet. In a world in which you expect everyone to back-stab the protagonist, it can be difficult to make twists come as a surprise.

“Will one of these stories explore the moral reasoning of one of the CEO’s of these companies? I hope so. How can they let it get this bad?”

“If I didn’t live in one of the towers, then yes, I would definitely run away, too.”

Anyone who is a fan of cyberpunk, or who has heard about cyberpunk and wants to dip their toes in. With nine short stories, this is a great introduction into the genre, or a great “hit” if you are just looking for fun stories. It assumes you know a little about the genre and doesn’t hold your hand, but also doesn’t try to impress you with overly-technical explanations of everything, everyone, or how the world got to how it was.

Anyone who hates cyberpunk or science fiction in any way. Cyberpunk relies heavily on technology AND out-of-control inequality. If discussing or acknowledging inequality makes you uncomfortable, this isn’t for you.

There is rampant drug use, violence (including blood and gore), strong language, implied sex, and nudity, and very brief anti-religious exposition.

I can’t say I’ve read many books like this. To be honest, I haven’t read any cyber-punk books before, outside short stories. Though, if you’ve read anthologies that share a universe or a setting, then you’ll find the same thing here.