The Haunting of Hattie Hastings 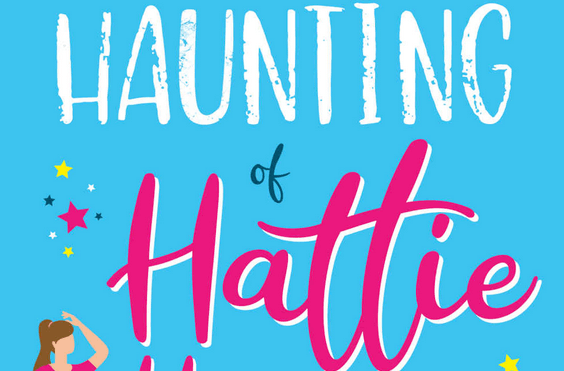 Title: The Haunting of Hattie Hastings 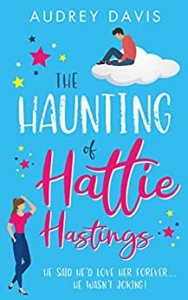 “A ghostly and gloriously witty romantic comedy. Some people just won’t take death lying down…Hattie Hastings is happily married to lifelong sweetheart Gary, until a terrible tragedy leaves her widowed and heartbroken. Struggling to cope, she is left reeling when her deceased other half returns, popping up at the most inappropriate moments. As Hattie tries to convince others – including brother Jack, and best friend Cat – that Gary has returned, he finds himself under the care of spirit guide Clarence, and also befriends another inhabitant of the place called The Present. Meanwhile, Hattie’s mum Rachel is facing a daunting battle, and Cat’s ex-husband Stewart is determined to prove he deserves a second chance. Throw in a tentative spot of dating for Hattie and you have all the ingredients for a book that’s been described as ‘brilliant’, ‘hilarious’ and ‘a great feel-good read.'”

Looking for something light and heartwarming, as the front cover self describes, I was drawn to the title of this book from the ever-growing list (We are so ecstatic by the way, with all the titles that have been submitted for us to review! Thank you, authors!) in this time of pandemic and seriousness. This hallmark-esque novella was a nice light read. If you are the sort of person who enjoys happy, tidy endings, this book is definitely for you.

Each character in the book is facing their own challenges in a pretty convoluted plot, so I’m just going to list the characters and their arcs.

Hattie: The main character trying to put her life back together after her husband, Gary, is tragically killed by a hit-and-run. She works at a coffee shop as a barista trying to support her 22-year-old son who becomes haunted by her husband. She helps her husband with the missions he needs to accomplish before he can move on. This includes traveling to Edinburg and passing on a message to grieving parents, and randomly getting into a minor car accident and meeting her next partner after going on two random bad dates and subsequently getting to a place where she moves on from her husband and the grief that she feels from losing him.

Gary: The husband that passed away has a mission to accomplish before moving on to the real afterlife. His first mission is helping a dead boy named Marty convey a message to his grieving parents, and his other mission, which is revealed much later, is to give his wife permission to move on.

Jonny: Their son, who starts out with no job, a college drop out, and no girlfriend. By the end of the novel, he has a job, and a girlfriend, and becomes more responsible.

Cat: Hattie’s best friend, a divorced beautician. She is dating a nice guy with terrible dad jokes when her emotionally abusive ex-husband tries to win her back by trying to not be outwardly repulsed by her body. Despite his good looks and charm, she ends up seeing through him, kicking him back out of her life, and opening a salon/juice bar with Hattie.

Rachel: Hattie’s mom, who is diagnosed with cancer and makes the decision to be more committed with her man when previously she was keeping love at an arm’s distance.

I really liked the character, Cat. I liked her journey from being in an abusive relationship where her husband was controlling and critical of everything she did, thus keeping her small, to eventually becoming independent, finding a healthy relationship, and expanding her business.

I liked the concept of a slow grieving process that Hattie was lucky enough to get. I didn’t feel a lot of sadness for her because Gary was still involved in her life for a number of months before actually moving on. I thought it was nice that she got a long transition period and it wasn’t so abrupt and sudden. For me, when someone close to me dies, I think about what they would do and say in certain situations, but Hattie actually got the help from her spouse to put her life back together and move on. What an ideal situation!

There were some really funny and relatable lines, like “Hattie drained her drink and sighed. Very heavily, like a worn-out old couch when someone sat on it.”

I liked how the end message was that women should be standing on their own two feet and not relying on a man as a caretaker — whether emotionally or otherwise. Women should be developing their sense of self, and that’s a message I agree with.

I was expecting a lot more drama. Although there was a lot going on, I felt like the plot was a little flat. I kept waiting for a big climax of something to happen — some danger, something mysterious.

I thought there was a HUGE cognitive disconnect in this book. On one hand, you have this lovely character, Cat, who escapes an abusive person that emotionally bullies her by making remarks about her weight, body, diet, and exercise habits. Cat’s arc is that she escapes and starts to build her self worth. But the author describes people that don’t fit traditional beauty norms (especially women) in a derogatory way throughout the entire book. For example, “Flatter than Kiera Knightly’s chest,” “That wrinkly belly flab hanging out everywhere,” “She always maintained a slender figure despite having a wicked sweet tooth,” “Now she was facing a challenge that would defeat lesser mortals [referring to people who die from cancer]”, “How he knew that Hattie was indeed a looker and not a wizened old hag.” Just to name a few. She also demonizes carbs, which are necessary for survival. So, I was confused about the messaging of that narrative. I got, “Don’t be hypercritical of someone’s body, but also fat is bad so just don’t be critical to their faces.”

It didn’t seem like Gary’s mission was really his mission. His mission seemed to be to offload it onto Hattie. Which was very confusing to me. I would have understood if it were something that Gary actually had to do himself, such as figuring out who killed him, or he needed to physically find someone for Hattie. But, Hattie meeting Laurence was completely random and really didn’t have anything to do with him besides some last fading away afterthought words of approval. So, his unfinished business was just to make Hattie work more?

Although everyone’s conflicts came to pleasant resolutions, it sort of felt like a few things were kind of just thrown in at the end to make everything come together. It wasn’t until 93% through the book that we meet Laurance, for instance.

I know these complaints seem nit-picky and shallow, but I just didn’t find it very thought-provoking. It was, indeed, a light, romantic comedy as promised.

What I wish the author had done differently.

There were a lot of pop culture references and British slang that I didn’t really understand (because I’m American). I did understand the meaning because of the context clues but also didn’t really relate to a lot of the humor.

The funny thing was that the author felt to explain very common knowledge, like who Jane Austen and Houdini are, and what a cowbell is, but didn’t explain other things like who Bill Connolly is or what a “glow-in-the-dark nose” is.

I had made a prediction towards the beginning of the book that Barry was the one that had actually accidentally killed Gary. It looked like it was all set up for that to be the case. The biggest plot twist for me was that nothing like that happened at all and Barry wasn’t actually important to the storyline.

“Jonny sounds like how a boomer thinks Millenials talk”

Anyone who loves Hallmark Movies would really enjoy this book. British people might relate to this type of humor more.

I would compare it to a Hallmark movie.