A serial killer thinks he overstepped his bounds on his last murder. He attempts to seek help on the serial killer website REDRUM. A psychiatrist who believes he can help psychotic killers through counseling sets up a group therapy meeting dubbed Psychos Anonymous. Six masked murderers attend th 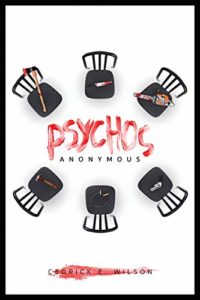 e meeting but one of them is not there to be counseled.

This book has an interesting premise: What would happen if psychos went to group therapy? After some introductions to the group therapy members, and a look inside their minds thanks to the 3rd person Omniscient Narration style, we see their chaotic story unfold. We are also introduced to the detectives who are assigned to their murder sprees and their motives and the means they use to solve them or fail to do so.

As a pretty basic 20 something white female, I am pretty into the ever-growing cold case genre. From watching Ted Bundy slash his way through 5 states on Netflix to listening to my fair share of murder themed true crime podcasts, murder has just been something that has always fascinated me. I was especially excited and intrigued to read this book. I thought the premise was pretty unique and I was interested to see what murderers in therapy would look like.

The book starts out with Detective Kang, a twice-divorced Asian American detective contemplating on the rampant amount of serial killers going unchecked in his otherwise nondescript town. It then starts introducing the characters- mostly the main character BK, as a “psychopath” hiding in plain sight as a Best Buy manager. This character introduces us to the dark web, and a killers’ version of FB called REDRUM (murder spelled backward). From his interactions on that website, we begin to be introduced to the other serial killer characters. After going through some of their backstories – A gang-rape victim turned serial killer of any and all athletes, A black man that experienced police brutality at a young age in the form of his dad and best friend being murdered unjustly in front of him that now takes his own justice on any cops that misuse the badge, two racist white people who run a motel to exclusively kill POC, and a corrupt politician who hates and exclusively kills homeless people.

We are then introduced to a psychiatrist, Dr. Pleasant, who has a theory that murder can be cured like any other addiction. He puts his theory to the test by also finding this REDRUM site and reaching out to some people who have a desire to change their ways. He sets up some anonymous group therapy sessions in the abandoned parts of town where the participants all wear masks.

Dr. Pleasant has most of the participants figured out, except for BK (Troy’s username- stands for Bitch Killer). BK is puzzling to Dr. Pleasant and he doesn’t feel that BK is being truthful. It turns out that BK actually isn’t a serial killer, but a mourning father who is out seeking revenge for his daughter that had been murdered and found in a shallow grave earlier the previous year. And as his hunch is correct, one of the participants is the murderer!

The rest of the plot follows these characters as they interact with one another and eventually lead to most of their demise. The “Trashman” (Lew, the corrupt politician) had actually murdered BK’s daughter because she was taking food to the homeless and accidentally witnessed him in action, so she had to be dealt with. Unfortunately, BK dealt with this the wrong way and ended up being framed for all the homeless murders by The Trashman.

Detective Kang ends up being murdered after tracking Dr. Pleasant to a meeting, and his partner, Detective Doug, ends up working with BK to catch Lew.

Unfortunately for BK who ends up in death row, regretting his decision to try and let the justice system deal with Lew, money, and power win out in the end. Lew strikes a deal with Detective Doug and pays him to keep him on track of his new goal of not killing any more people. Detective Doug ends up getting everything he ever wanted- a steady income, being able to afford his wife’s IVF treatments and fame for “solving” a case! The other murderers eventually kill each other in unexpected ways.

I did like how diverse the characters were. A wide array of ethnicity, socioeconomic groups, and even the LGBTQ community were represented in this book. I did like the reminder that mental illness can touch any person, regardless of race or gender. There were also some pretty satisfying murder scenes that didn’t disappoint and where what you would think should be in a book about killers. I did also notice that there were some pretty useful how-tos on what the dark web is, how to access it, and how to get through a home security system with a common walkie talkie. A perfect scratch for the itch that any person obsessed with true crime truly has.

I thought the author did well at laying out a pretty complicated plot in the short amount of pages that the book has. It has a lot of hooks along the way that makes this an easy book to binge read. It would be perfect for a flight/train read. It also was a pretty light feeling book despite the heavy material content. I didn’t feel sad while reading it, or that the descriptions were too gruesome or disturbing.

There were some very beautiful descriptions, and just really great one-liners sprinkled throughout the book! Besides the narrative style, I did appreciate and enjoy his overall voice.

I felt like a lot of the characters were pretty one dimensional and often the dialog was pretty predictable and a little shallow. I didn’t really feel like any one character had that much of an arc besides the main character. Which is understandable because of how short the book is. I would have liked to have a longer book to allow the author room for more elaboration or less characters.

I also thought the plot was pretty convoluted at times and felt a little random.

I didn’t really like the political interjections by the narrator. You can tell the narrator is very left-winged liberal – sometimes that works to the advantage of the story, and other times I think it gives the story a pretty homogeneous feel. It turns some of the characters into caricatures of political stances, or the view of the left-wing on other people. Ex: A couple of people are killers strictly because they are racist white people. But maybe that was the point? Maybe the point was to shine a light on the results of some of our day’s social/political l problems if not taken seriously now. I just wish the characters would have been a little more multifaceted.

I’m not sure that the 3rd person omniscient narrative was the best choice for this story. I would have liked to see the story presented through a 3rd person limited or even 3rd person objective style. I think this narrative style really pushed the story and filled in details in an unnatural way. The plot felt forced at times because of the heavy leaning on the narrator. Ex: “His actions make sense because that’s just what happens when people get too much power…”

I wish more time was spent on the actual therapy aspect. There were only 2 group sessions, and the psychiatrist really didn’t have that much to do with the story, and his arc was never really resolved. I’m not going to give away the ending, but I don’t like that the answer to the premise question was literally answered on the last line of the book. I wish it would have been set up so that the reader could infer that for themselves. Again, a lot of spoon-feeding.

There were many surprises in the book! I felt like a few of the reveals were effective. Especially in the middle of the book. Towards the end, It felt a little less like plot twists and more like random plot occurrences, which were less effective.

“Addiction education.”
“Ooh, that was a very deep Black Lives Matter quote”
“Me, too!”
“This is a very shallow view of people going through IVF.”
“I’m not super happy about how some of the conclusions ‘just dawned’ on the main characters.”

This book is good for people needing a light serial killer read that they don’t have to think much about. It is super binge-able and great for escapism purposes. It’s the perfect length for reading on a short flight or road trip. For reasons that I explained above, I feel like Democrats would resonate a little more with this book than Republicans.

This book has a lot of triggers: police brutality, sexual assault, divorce, broken families, IVF, morbidity, KKK, racism, and obviously murder. So, it would not be a good book for literally anyone who is triggered by these issues. I also don’t think it’s a good book for young readers. This is definitely a YA+ novel.

I’ve literally never read a book like this- but it does remind me of the Michael Bay movie 6 Underground in that there are a lot of characters and a lot of time is given to the characters’ backstories that might not be that relevant. Also, everyone has nicknames so when they are used in conjunction with the characters’ actual names, it gets a little confusing. I feel like the layout and story tone is similar.