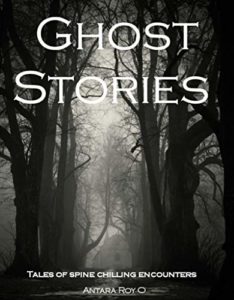 That there might be a certain something that exists beyond and across our conception of time and space. You can feel it in your bones that this something is real. Whether it chills your bones or fills you with warmth- that’s up to you, are you prepared?

This is a collection of short Ghost Stories set in India and Nepal. The Ghosts range from harmful to helpful when interacting with the human characters.

Just like any normally creepy person that is mildly obsessed with the supernatural, I enjoy my fair share of Ghost Stories. I was drawn in from the title and the lovely cover art. It was a fun surprise when I found out that the stories all take place in India/Nepal. It made these tales a little exotic, which was exciting.

The Terrace: Two men decide to hang out in a building with a balcony that is known for recent suicides. They talk, have drinks, a supernatural occurrence appears and they are found dead the next day below the balcony. Game of Death: A teen boy walking home after cricket practice decides to go to his uncle’s house instead. On the way there, he suddenly doesn’t recognize his surroundings. A band of foreign-looking horsemen come into the clearing. They seem to not see him. They start playing a game of cards which quickly turns violent resulting in one of them being stabbed to death by the others. The teen wakes up the next morning in the clearing, not a trace of the ghostly visitors from the previous night to be found. The Girl By the Lake: Two guys travel through the night. Despite his friend’s protests, the driver decided to pull over near a lake that is known to be haunted. The car won’t start back up again.

After trying to fix it, a beautiful woman appears seemingly from nowhere offering to fix it. In exchange, she asks for a ride home. Despite his friend’s protests, the driver is entranced with the woman and agrees. After driving them down winding paths through the jungle, she says they must walk the rest of the way. After far too long, they chicken out and decide to run away after they notice that the woman isn’t walking- she’s floating! Goat’s Leg: A traveler leaves a party near a graveyard late at night. Mildly intoxicated, he tries different ways to get home. Each person he encounters around the graveyard ends up being dead, which he discovers by each revealing to him that they have goat legs where their right leg should be. A Friend In the Mountain: A journalist and his friend go to Nepal to collect stories from citizens of a remote village. The friend decided to go collect some by himself after his journalist friend decides to stay in his room. He meets a man with a ghost story about a time when he went hiking with some friends and ended up needing to get help when their guide befell a serious illness very quickly. While the rest of his group stayed with the sick person, he tried to get help. He was lost, when a sudden storm had him find shelter in a cave. There was a woman there.

They chatted and He explained that he needed help, and fell asleep. When morning came, he was greeted by his group. He wondered how they had found him and they said that the woman doctor who came last night told them where he would be. Room No 6: Travelers decide to stop at a small inn. They insist on separate rooms, despite the inn owner’s advice. The owner says that Room number 6 is closed and has been for several years due to paranormal activity. A man decides he doesn’t care, and insists on staying there. The room is opened and quickly cleaned. As the man is trying to sleep, he encounters a ghost who is chopped into several pieces that are falling from the ceiling. Once all the pieces of the ghost have dropped, he proceeds to tell him the story of how he was murdered. Look Behind: A man returns to his village after many years. He meets his brother in law at the terminal. Eager to climb up the mountain to see his sister, he is warned first that if they encounter a woman, to ignore her, not to look at her, and don’t respond to her pestering. As they started to climb, A ghostly woman appeared.

Her feet are turned backward and she sounds a looks exactly like his sister! They get scared and return to the bottom of the hill to get escorts. The ghost doesn’t leave them alone and follows them until they return to the village.

What I liked about Ghost Stories: Bone Chilling Encounters

I liked that these were set in India/Nepal. The author did a good job of painting the scenery with words. I also liked that not all the ghosts were wanting to cause ill will towards their victims. A helpful ghost can be just as spine chilling as a harmful one! I don’t scare too easily, and there were a couple stories that I genuinely got that “spine chilling” sensation that the title promises.

I thought the author organized the stories in a way that flowed well.

I’m wondering if the stories would make a little more sense in their native language. There were quite a few times that I felt I was reading a direct translation of a different language to English, where it sounded a little off and didn’t hit exactly right. I think this made it so I wasn’t every fully immersed in the story.

I felt like some of the stories were space fillers. There were a few that were well written with great smooth plots, while others fell a little flat and seemed a tad random and not written with as much attention to detail.

I wish the dialogue had been more varied. I kept noticing the same phrases throughout different stories, even though they were supposed to be completely different, unrelated characters. A lot of the characters felt like the same person, and after reading it it was hard to remember/ differentiate between stories. I realize that it’s hard to do in short stories, but I think giving the characters a little more dimension would have been nice. Nearly all of the characters were male. I wish there had been a little more variety. Switching things up a little might have made the stories feel like they were happening to different people, instead of the same man.

Were there any surprises/twists in the book? If so, were they effective. If not, why?

I feel like each story had a twist, but whether they landed or not was pretty hit or miss. Without very much knowledge of Indian culture and lore, a lot of them felt pretty random to me.

“What a beautiful description of Tamarind trees.”

I feel like this is a good fit if you are looking to read some cultural diversity since it does give you a feel of the culture, vernacular, and values of the Indian Culture. It was also pretty clean, no profanity, sexual scenes, and very little gore. The scares were also pretty light. Nothing too dark, here! For that reason, I think younger readers would enjoy this book maybe a little more than adults would.

Who is this book not a good fit for?

This book does have alcohol use, smoking, and talk of suicide in the first story, so anyone who is triggered by that may not want to read.

What are some comparable books?

Find it for sale (with review) HERE