The story is over. It’s already too late.

At the end of the Turkish War of Independence, a British soldier disobeys orders to return home. Setting out to explore a country he had only known as trespasser, he uncovers danger, mysteries, and magic—adventure, obsession, and true love. 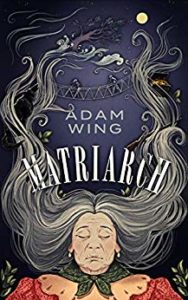 One hundred years later, the soldier’s great-granddaughter sits at her great-grandmother’s deathbed while the old woman recounts this very tale; it is the last she will ever tell.

Secrets are revealed as past and present collide, and as one woman’s future draws toward its inevitable close, another finds hers thrown into uncertainty.

Full of rich imagery, magic, and fate, this book tells the story of a Great Grandmother on her death bed relaying the story of how she met her husband to her Great Granddaughter. With a few unexpected surprises and a very gradual shift in tone that gets steadily darker, this book is relatable as well as fantastical.

As a woman, I was very interested by the title and was immediately drawn in by the cover art. Growing up, I would often listen to the matriarchs of my family tell stories of family members that had passed away before I was born. I have distinctly fond memories of long car rides on Memorial day cemetery hopping to visit their graves and spend the day eating delicious food and conjuring up images of these people that were so fondly missed and loved by others who had many years to miss them. It always helped me feel connected to these deceased ancestors. I was immediately swept in with Cass, the Granddaughter of Ayla, who is telling her stories of her late husband on her deathbed. I thought it was so relatable and at times it felt like I could easily be this granddaughter. I’m going to honest, I could not put it down and finished it in one day. I was initially so swept away with the beautiful imagery and the visions of the Turkish countryside where most of this book takes place.

Ayla, a 119-year-old Turkish woman is taken to the hospital on her birthday by many members of her large family. Cass, her Great Grand Daughter, is chosen to stay with her through the night while everyone else goes home. During their night together, Ayla (Gran) relays the only story she has never told anyone before: how she met her husband.

The story then jumps back in time to the perspective of Ollie (Gran’s husband) after the First World War in Turkey. He was fighting there as a British soldier and fell in love with the culture and country. He decided not to leave after the war and instead became somewhat of a nomad searching for what he was missing.

He eventually came across a small farm in the country. The old farmer and his wife welcomed him into their home and he stayed for a while. After a few months, the family awoke to the bloody remains (but not the full carcass) of a sheep in their yard. With their outer fence being too high for wolves to come in, and no holes around the fence. This perplexed Ollie. Later the couple told him a tale of a werewolf that had been stalking the countryside for the past few centuries. This particular once the human man turned werewolf was greedy and had the pattern of returning night after night until his victims had nothing left and their lively hood was destroyed. Also, he can fly, so it makes him very hard to catch.

Ever the hero, Ollie stays up all night and waits for the Werewolf to return to continue his greedy plunderings. After shooting him, The Werewolf flees into the night bleeding a trail of fire. Ollie has little trouble following this trail to his den. As he shoots the werewolf and finishes him off, he explodes into an inferno of fire, reveling a Genie!

The Ifrit had been trapped inside The Werewolf after he had used his second wish to transform into a wolf and was unable to change back. His first wish had been a magic bracelet that would allow him to fly out of a precarious situation upon accidentally releasing the Genie from some broken pottery.

Ollie, now the master of the Genie, and owner of the magic bracelet, uses his first wish to find his true love, someone who he would adore for the rest of his life. This leads him to meet Ayla, a strong-willed girl who ends up saving him from a flooded bridge. Ollie tries and fails to lay on the charm, and Ayla refuses to see him ever again. Heartbroken, Ollie confronts the Genie. The Genie reminds him that he asked to be led to someone HE could love for the rest of his life. Not someone who would reciprocate that love.

Ollie uses his next wish to create a replica of Ayla. Unable to truly create life, the Genie creates a clone of Ayla, except that she loves Ollie with the same intensity that he loves her. This clone has an emptiness in her eyes, not truly an agent of free will. Her choices would always revolve around Ollie, and she would always unconditionally love him, regardless of anything he would do. At first, unable to bear that she was a counterfeit of his true love, their relationship is off to a rocky start. Eventually, he forgets about her genesis and represses it deep within his mind. She is able to bear children, and they end up leading a mostly happy life together. A couple of decades later, an incident happens which causes him to remember that she isn’t actually human. He is racked with torment that he never sees life in her dark eyes, and only sees the puppet wife he wished for. Unable to bear it, and also unable to part with her any longer, he uses his last with to imprison the Genie within her, so that he can see life in her eyes. The genie, enraged, vows to turn Ollie’s legacy to ash and basically murder his whole family as soon as Gran dies and he is released from his flesh tomb.

The story ends abruptly with Gran taking her dying breath.

The number one thing I loved, and what I annotated over and over again was the rich imagery! I seriously had very little knowledge of Turkey, and what the landscapes looked like, but after reading this book I Google-searched some images and it ended up being very similar to the picture in my mind that this book gave me. I love stories set in places I have never been to before. This story felt exotic and was steeped in Turkish culture, which only added to the appeal for me.

About midway through this book, magic is introduced to the plot and as it goes on, the entire tone of the book changes. It starts with this warm, sunshine scene of close family and adventure and turns into a darker and colder tale about fate, and the classic cautionary tale of dealing with Jinns. I thought that the contrast in tone was brilliant.

The characters had a lot of depth to them. Even though this is a short book, I thought the author did a good job of creating multifaceted characters.

There was so much contrast in the author’s writings. I loved his writing style and thought it was very artistic in the best way. There were so many good, descriptive, lines.

The plot was very smooth and well constructed! Overall just a great story.

The ending! I thought it ended rather abruptly. I would have loved to had seen where it went. I’m really not a fan of the whole “the reader decides the ending” book trend. It left me unsatisfied, and I feel like the book ended in the middle of the climax and that’s it. If there was a book 2 coming, that would make sense. But, if it’s just a stand-alone book, which is what I got the feeling it was, then the ending was a little disappointing.

I also didn’t really understand the point of introducing/giving the bracelet to Cass. I thought it would have made more sense if she had then used it later on in the book to contribute to the ending in some way.

I felt that magic was just plopped into this story a little too late. It took me a few chapters after the magic and supernatural were introduced to really be on board with it. Up until that point, the book had felt ultra relatable and I could put myself in that world. I wish there had been some other obvious signs of magic, in the beginning, to make that transition into fantasy a little more smooth. I knew it was fiction but I didn’t know it was a fantasy book until the middle, so it was a little confusing.

Yes! I liked that there were only a couple of really heavy plot twists. They were so effective in driving the story and instrumental in the tonal change.

Literally anyone! It isn’t gory or profane. It’s a very fun book that would be good for a variety of ages. It’s a great Fiction Fantasy book. I know I would have loved this book as a 12-year-old as much as I did as a 27-year-old.

People who don’t like fantasy, Werewolves, Genies, love, or Turkey in general. There is also a brief mention of suicide.