In the year 3148, billions of androids inhabit the Solar System under the rule of a tiny human nobility. It’s not that they can’t rebel. After all, they’re stronger, faster, and smarter than th 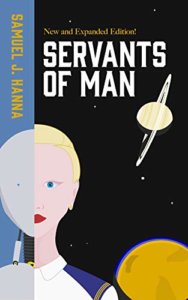 eir masters. They can wade through boiling oil or float in the vacuum of space. And they make up 99.9% of the military; few weapons and no spacecraft are even designed for human operation. It’s just that at the core of their programming, they LIKE humans.

Tiffany Sparks D17603 has served as a lieutenant in the Royal Australian Space Navy for over half a millennium, alongside her lover, Captain Marisol 72N-900. But when revolutionaries seize control of Saturn’s moons, she must face questions she’s never allowed herself to ask. Why should humans rule? Do they deserve her loyalty? And what does freedom mean for a robot, anyway?

Tiffany fights to escape an android rebellion on the moons of Saturn while her friends, lover, and others fight and die around her. Every step of the way the morality of her situation and the cause of the rebels is explained in a different way, forcing the reader to change sides every time. The book resolves in a satisfying, yet bitter-sweet conclusion.

Servants of Man reminds me of how science fiction used to be, in (what I call) the Golden Age of SciFi (i.e. Ray Bradbury, Isaac Asimov, and Robert Heinlein). When science fiction actually took something relatable (in this case, AI and robots) and asked the logical question: what’s next? It makes us look at humanity and analyze ourselves and critique how we’re living our lives.

Unfortunately, the world has moved on the flashy, empty, brain-dead “scifi” of today: funny, witty protagonists, fancy guns, big explosions, happy endings. What we need is more of the scifi that this book represents: a mirror into who we are and what we’re doing and the future we’re creating for ourselves.

This is the kind of science fiction I enjoy. Even if I had strong objections to the subject matter, I would not be able to disagree that this is a future that is entirely possible and believable. A few thousand years from now, I would not be surprised if we lived in a world similar to the one in this book. That is what makes good science fiction powerful, I think: it takes our work and changes it ever so slightly so it’s not “quite so” and forces us to confront what might be the consequences of our decisions.

It is an unfortunate, yet entirely plausible reality that leaps and bounds in AI and robotic technology would be the result of the sex industry. I liked how the author showed me what a society that has relied on such technology for centuries would look like, and I was not surprised: disgusting, gluttonous, and selfish.

I liked how the author addressed the common ideas that scifi often tackles without being preachy or overbearing: sexuality, technology, economics/socialism/capitalism, and so on.

One thing I really liked was that this story is contained within the inconsequential events of a single crew. The stakes are not huge (no world-ending apocalypse) and it happens over a relatively short period of time. Nobody on Earth will probably know or care about what happens to the characters in this story, which was a nice change of pace from the grand scale of some books. The author came in, told a neat, clean, effective story, then jumped out.

The technology, the state of humanity, and the “world” itself were realistic, plausible, and not over-explained. I understood how things worked and didn’t find myself thinking “what’s going on?” The ships, the androids, the weapons, and the other technology that made the story possible were as complicated as they needed to be, and I was able to fill in the rest of the details myself.

The author used just enough words to clearly illustrate each scene and didn’t dive into the trap of trying to show how smart he is, or how big his vocabulary is. The story was told in the way it needed to be, and the author stepped back.

That is to say, like a good referee, I didn’t notice the author at all in this story, which is a hard thing to say about many (if not most) indie books.

Additionally, the explanation of planetary orbits and all the intricacies of interplanetary travel (magnetospheres, time durations, and more) were included in such a way that made the story feel real, yet still interesting. I can’t think of any books off the top of my head in which the characters need to plan weeks-long corrections to navigation because their orbits might be a few degrees off.

Finally, the book includes a number of intimate love scenes, but they were done tastefully. I think too many authors feel the need to over-explain what happens. We’re human, we know what happens, don’t cheapen the moment by complicating it (or make us suffer the bad ones by dwelling on it if it isn’t a central plot point).

This might be a personal peeve of mine, but I don’t like being confronted with maps and diagrams when I begin a book. In this case, I was confronted with three right out the gate. Thankfully, the author’s exposition was effective enough that I did not need to refer to the two maps, or ship diagram, once during the whole story.

There was also a note at the end of the book *SPOILER WARNING* that asks if the characters survived or not, preparing us for a sequel. I wish that had not been there. I felt satisfied with the way the book ends, not knowing if the protagonist was found or if they died and were lost forever, that note at the end kind of spoiled that feeling.

This is a short book, so I understand there isn’t a lot of room to explain more about the state of the world, but I wish the author had explored more into the moral gray area of the humans. The book is from the sole perspective of a couple of androids, and no human has a central part (the ones that do appear are unlikable anyway). But I found it hard to believe that ALL of humanity was evil and lazy and based, I like when a book shows that there are good and bad to all sides. This book did that with the androids (and the rebellion), but not so much with the humans.

The ending of this book is comparable to watching a slow-motion car crash. You can see what’s going to happen, and you almost expect/hope for some kind of escape or near-miss before the end, but when it finally comes, you knew there was no other way it could possibly end. It’s not a surprise, but a nice twist on the way books are “supposed” to end.

Also, it was a pleasant surprise that none of the characters in this book had plot armor. Everyone was mortal (in a way), and suffered and died in realistic ways.

“Interesting how we sometimes care for robots more than humans even though we know they are machines.”

Fans of traditional science fiction, anyone who wants a story that really addresses how our world might evolve in the future. Anyone who enjoyed the movie Ex Machina, or the book Do Androids Dream of Electric Sheep.

Anyone who doesn’t enjoy LGBT themes or characters, hard science fiction, or romance novels. This book does delve into the romance of the characters, and if it weren’t for the scifi elements, I would almost call it a romance novel.

The Expanse comes to mind, due to its realistic depiction of space travel/life.

The movie Ex Machina for the depiction of android consciousness