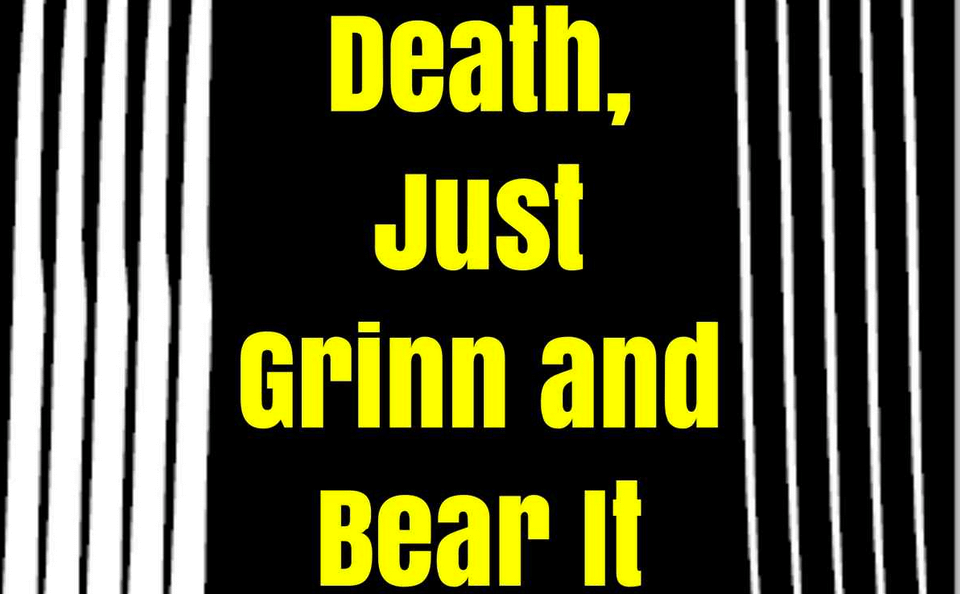 Title: Death, Just Grinn and Bear It: Which door will you choose?

Death is a tale as old as well… death. Jack’s life is simple in many ways, yet extraordinary in others. It’s simple in the fact that he has a well-paid job, routinely partakes in sexual encounters and enjoys the occasional drink. The extraordinary part kicks in when you understand what it is exactly that Jack does for 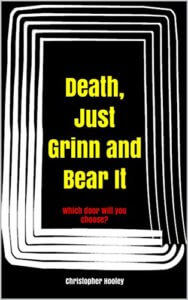 a living. Jack is a ‘Grinn and bear it’ representative or what’s more commonly known as a Grimm reaper. This is his story and it’s the story of just how cruel life can be when you allow your past to steal your future.

A professional Grinn (someone who shepherd the dead through the doors after death), Jack, struggles with love, loss, (a lot of alcoholism), and the secret machinations of the world beyond. Through his daily work, Jack shows us the different ways many of us encounter, and deal with, death.

In this book, Jack is used as a vessel to explore the deaths of a number of people, but also as we explore his past and his future. We learn more about Jack, how he became a Grinn, and cheer for him as he tries to find love again. All the while unseen (and seen) forces have other ideas.

I didn’t know what I was expecting when I started reading this book. The title didn’t give any hints, and the very unique concept (and storytelling style) required an adjustment on my end. This book is a very intriguing way to explore the meaning of life, the purpose of death, and how many people deal with it. Many of the passages were thought-provoking, or frustratingly tantalizing. What felt like random tangents came together in the end to a surprising conclusion and effective cliffhanger.

This book is full of unique ideas, many of which we only get to experience the surface level. It is clear to the reader that there is a meaning behind the three doors that appear shortly after death, but the author does not tell us, allowing us (like the recently-deceased) to wonder and question and hypothesize about what might await beyond.

The mysterious man in the bowler hat has a mysterious mission from the man we assume is running everything a la the Grim Reaper, but we only get snippets of conversations and tidbits of information about who either are, what they do, and why.

This withholding of information can hinder many writers and books if it is done poorly, but here it is done very well. The book remains faithful to its main focus: Jack and his development from an antisocial, womanizer to a caring, feeling individual — and the analysis of death and the way each of us treat it.

As a Grinn, Jack is forced to help a few different individuals, which each died in different ways, through the doors. Each has a different background and a unique journey to accepting their death and picking a door to walk through. This was a wonderful opportunity and I’m glad the author took the chance to really delve into how each struggled to cope with their new reality. The fact we don’t know what happens on the other side of the doors makes our interaction with them all the more meaningful, I think.

This book is dripping with emotion. Each of the main characters are believable even if their chosen professions might not be. Jack’s evolution as he falls in love with Tiffany is believable and relatable. His relationship with Jessica is tangible. All their frustrations and joys and struggles feel very real. At no point during this book did I think “well that wouldn’t happen,” or “That’s unbelievable, who would do that?”

If the author doesn’t have first-hand experience with death, suicide, bad breakups, alcoholism, bad marriages, or raising kids, then they did a masterful job of doing enough research to make me feel like they did.

The suspense Jack feels as he approaches each death scene was expertly created. As he enters the home of a woman who committed suicide I felt the anticipation and the nervousness Jack felt. It was wonderfully crafted! Her explanation and reasoning for her actions broke down pre-existing judgments that I had when Jack arrived and was a great moment of character development.

Jack goes through some very real changes as a character, and we are there every step of the way. We see him grow and develop as a character, and by the end, he is a very different person than when we began. It was satisfying to see and read, and I’m happy the author pulled it off so well that by the time the last page came around, I actually cared what happened to him.

This is not a happy book. I wouldn’t call this escapism by any stretch. This book explores death from many angles, and a wreck of a man who is struggling with a number of issues. This is a personal preference, obviously, and I see a lot of good things in this book.

This is not the kind of book I would say to someone, “Read this, you’ll enjoy it.” Instead, I would say, “This book will make you think, it has some very interesting ideas, and we should talk about them when you’re done.”

A perfect book club book, in other words.

One of the death scenes was particularly difficult for me to read. It was very well written and I could see how it was going to end from a mile away, but it was like watching a car crash in slow motion and I was powerless to stop it. This one involved the story of a young boy, and as the father of two young girls, it was difficult for me to read without skipping. Not everyone will have the same problem, and other readers will have difficulties with some of the other deaths, I’m sure.

There was a lot of exposition about some of the dead/dying characters that I felt dragged on for too long. Sometimes the scenes with Jack also had a lot of description that was dedicated to other things, like the nature of death and his job, which were the most fascinating parts of this book.

This exposition, I understand, was there in order to help us empathize with the dead, which it did, but sometimes I felt it overstayed its welcome and could have been trimmed in some places to help the story move a bit more quickly.

The ending was a major surprise to me, and I felt rewarded for my patience. What felt like a number of unrelated stories tied together into a satisfying ending. The world-building and character development were woven together masterfully so we are not left questioning how or why, but are left wanting more. I am interested to see what happens in the next book and will be reading it for sure.

“I’m not particularly a fan of Jack, but I guess he’s not a fan of himself either. That’s the point.”
“Well yeah… I would have left Jessica too.”
“Nope. Not reading this page!”
After finishing the book: “Well dang. I was not expecting to feel this way.”

Someone who wants a very fresh story exploring death, and a unique take on the “management” of the afterlife. Something that will address hard topics and difficult situations in a new way. Book and reading groups will enjoy this book for sure.

I might recommend it to therapists and counselors? But I’m not an expert, maybe it would do more harm than good? But it would get those people who struggle with those issues a medium to talk about their problems.

Anyone who doesn’t like:
-Graphic sex
-Gore
-Strong Language
-Suicide (there are at least two graphic instances)
-Death in any way
-Books with lots of drinking

I struggle to think of any books that are similar to this one. I would classify it as literary fiction, but can’t say any really come to mind that addresses the supernatural aspects of death and the very real aspects of life in this way. A very unique book I am happy to have found.

I look forward to more from this author.