By Aaron J. WebberMarch 9, 2017January 25th, 2019Writing
No Comments
Growing up I had a unique fascination with the relationship that existed between the Soviet Union and the United States during the Cold War. If ever I had a term paper due, or a historical project to research, the Cold War was usually on the top of the list of candidate topics.
It wasn’t because I liked the Soviet Union, or what it stood for (let me be clear on this point), but the dynamic between the two most powerful nations in the history of the world, fascinated me. Naturally the order, the organization, the sheer work-ethic that existed within the Soviet government and military (at the expense of the rest of the people) was, in a way, beautiful. In the same way that a pitch-black illustration is beautiful when contrasted against it’s pure-white background. (Read into that what you will).

I won’t go into too much detail here, but I found it very helpful to view the world and events of today through the lens of those that lived through that time, and analyze the politics of today with that in the back of my mind. Especially during college, when in my political classes a majority of the students thought, spoke, and wrote alike. Everyone was trying so hard to be “progressive” or different in some way that they all just sounded stupid when they repeated each other like parrots for hours. Oftentimes I would kick the bees’ nest on purpose just to see what would happen (voicing opinions I knew would get a rise out of the group-think that often is today’s college classroom, but that is a topic for another post). But one topic that fascinated me was the idea of deterrence. I wrote a number of papers on the subject that I felt confident in debating any of my classmates on the nature and virtues of the topic during my studies.
The following unfinished (and edited for the purposes of the blog) excerpt from Annals of an Empire employs this idea of deterrence. Though taken out of context, and employed in the book in the wrong way, (I won’t elaborate on this point), I feel as though these few paragraphs do a good job summarizing deterrence in an elegant way, and I’m particularly proud of it.
“Have you ever made a snowball, sir?”
“Once, I believe, on the moon of Lasyr.”
“Why did you make it?”
“I was teasing my fiancé at the time; I threw it at her.”
“I see, and when you raised your arm to throw it, did she flinch?”
“Yes, she ran.”
“Now imagine, sir, if you had instead dropped the ball after raising your arm and then proceeded to make another, would she have reacted the same way to the second?”
“I would assume not, she would think I would drop it again.” 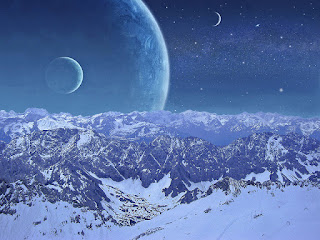 “Precisely, you did not make the ball in lieu of the intention of throwing it. You fully meant to throw it, and that is why you made it. Such it is with great nations. They do not create these weapons without the intention of using them, for the first moment another calls their bluff and they do not make full on their threats and their destructive capabilities, the next time a nation encroaches on their liberties, they will be that much more disinclined to believe any threats made by the invaded nation. They may hope the moment does not come in which they must use them. They may pray, deliberate, talk, and make concessions with the expectation that there is yet another road besides destruction. But in the end, they have made the weapons because they know there is a possibility they might be required to employ them, and they fully intend to use them should that moment come. And they expect them to work as designed.”
He took a breath. “However, so many nations have created such means of death and destruction in the past without the intent of using them, and their enemies knew it, or eventually were made privy to such information. History has proven this fact quite frequently. By trying to avert disaster, they unwittingly engineered a nightmare. The trick is, then, convincing your enemy that your weapons, and your power, are real, functional, and you quite intent on making use of their capabilities. What better way to accomplish that than to actually use them?”
He looked at him dead in the eye, without blinking; a cold hard stare. “Anything short of that invites the enemy to test your threats, to see for themselves if your power is real or imagined, truthful or exaggerated. By playing nice, and seeking the good of all, you invite your enemy to a game of chicken in which millions of lives are on the line. Are you willing to gamble with their lives, the lives of their families, neighbors, friends, grocers, mailmen, plumbers, and everything they have because you refuse to make good on a threat you made against a hostile, evil, barbarous nation that plans to test your threats by murdering every single one of them? Are you willing to risk a waking hell for all of us because you fear to make the tough decision? If so, the game is lost already. The enemy is on the move, and you fully intended to turn away from conflict at the very beginning. The lives of those people on the frontier are as good as forfeit if you believe more talking will divert the foe.”
He calmly turned and walked to pick his coat from the rack, and retrieved his hat. “The villain isn’t always the one who pulls the trigger, sometimes it is he who stands idly by as he watches innocent people burn to death and says: ‘It isn’t my fault.’”
The thin man was silent, staring back at him. “You made your snowball, sir, I suggest you throw it.”
Next Post